So what to say after five times seeing the “same” show? Well either get all technical which is not really my role or describe the nice setting for instance. 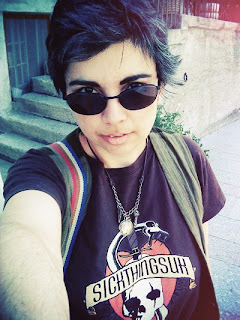 The compulsory "before show" photo, complete with "SickThingsUK" T-shirt

Avenches is barely an hour from home, possibly the closest I've ever seen Alice Cooper play. But I don't go there very often. Most school kids go there on school outings, so I had visited the roman town a few times as a kid, but not recently. Since I am not physically able to queue for several hours in the sun, I gave up on this idea and sat at a terrace to sketch some ideas for my book. And took some reference photos too, this is the perfect kind of set up for what I have in mind. 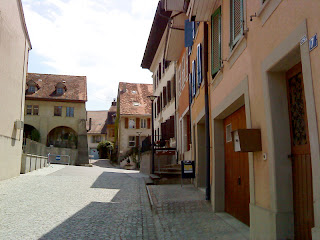 Added to the fact that I really can't be at the fence for eight hours in a row in what I call blistering sun (it was only about 25°C in the shade), I wanted to see my friends from Poison Heidi, play their dream come true gig. They really killed it, I heard comments around me from people who had never heard of them, saying things like “Hey they're good”.

After that I wanted to try and make my way as close to the stage as possible for the two main acts. I followed what must have been the corridor used by Romans to get to their seats in the amphitheatre, to some steps that went down to the stage side, right side for once. I managed to slip in, in the fourth row during Gotthard's performance.

Gotthard is one of the biggest Swiss bands, some of the few to be known worldwide, but I had never actually seen them live. Which means I never got to see their original lineup before the tragic death of original singer Steve Lee in an accident in 2010. The new singer Nic Maeder has a lot to prove to their fans, I heard comments around me, but mostly positive ones. Everyone agrees it's good that he does his own thing, although his voice is in a similar range to that of Steve Lee.
I was actually surprised by the good quality of the sound, so much on the side (in fact in front of the main right side speakers) very enjoyable, by the end of the concert I was really taken in. They included a version of “Hush” as they often do apparently. Not that they need covers as their own material is very well known here. But it was very cool nonetheless. Plus they finished with their version of “Mighty Quinn” that I always liked very much.

Crowd was good, but of course there was one obnoxious guy who pushed in at the last minute. The woman next to him didn't enjoy much as she was busy trying not to be run over by the dancing bulldozer. He had some nerve pushing in like that telling people he had to “work” filming some of the show with a tiny camera, and not even bothering to steady it.

I used a slightly less obnoxious technique to push forward after this show. I guess it's also a bit pushy, but I wait until people move away, before I slide into a gap. I suppose that during Alice's show the ladies making fun of that annoying guy had the same sort of remarks about me, because I enjoyed things very much. In fact the combination of various stressful things in the past days had me needing a good unwinding... and unwind I did, my neck hurts and I have bruises on my arms as usual, so I guess it was good. I did a lot of jumping as it was kind of the only way I could see over a tall guy's shoulder*. Plus it's fun and good work out. 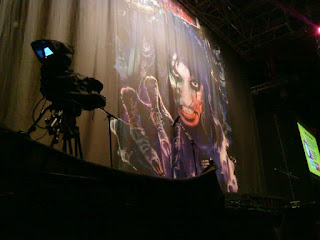 As you can see, camera, plus added cameraman, made that I couldn't really see Ryan very much. And the guy mentioned below sure didn't help. Ah well.


*Lucky as it was to get to the fence under the circumstances, I was right in front of the backstage entrance, which meant it was the area where some VIP's could come in and watch. And sure enough there was this giant of a man who stood right in front of me for most of the concert. But he made it up by getting me a dollar note from the ground later.

It's funny (but probably logical) that the backstage area there is under the stage, exactly where gladiators of old (or actors too) would get ready for their shows. 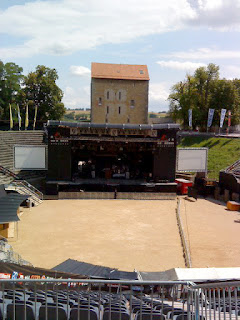 As I arrived early the area wasn't even fenced off yet, and I could have a stroll and take the setting in. You can see that the actual standing zone is quite small, of course the whole place was packed later in the day.


Setlist is of course still the same, with a few exceptions. Well, one exception, “Caffeine” has replaced “Clones” which is great although I adore “Clones”. Always nice to have some new songs.
Alice is still wearing the coat that says “new song” on the back, although “I'll Bite Your Face Off” isn't so new anymore, and not newer than “Caffeine”. But when it was included in the show the new album hadn't even been released.
My personal favourites on this setlist are as often the old songs like “Muscle of Love” and of course the amazing “Halo of Flies”, I love the part where the band plays the acoustic sequence and everyone of them seem to enjoy this so much.

Huge event for me, the snake made an appearance! To my knowledge it was a first for Switzerland, as usually the snake cannot pass the border because of our strict laws (good thing as such but annoying for the show) but I had seen a tweet from Orianthi just before the concert started where she she posted a photo of the snake so I had high hopes. And sure enough a snake was on stage during “Is It My Body” as should be.

I listened to the cd of last year's London show as I drove home, it was interesting to compare. I am by far not always able to recognise everyone's style, but enough to notice some changes. Steve Hunter is of course a legend and his style makes the band sound very different. I miss that. But it was wonderful to hear Ryan Roxie again. His playing on “Only Women Bleed” is so emotional.
I was also special to have Jonathan Mover on drums, although sadly from where I was I really couldn't see much of him.

And it was such a thrill to see Ryan do his trademark “spinning”, good fun and memories of old days (ok not that old hey!) Ryan was the “landmark” player I always saw from the first time I saw Alice live, so I missed him muchly. Alice often jokes that Thin Lizzy or Deep Purple hold a record for personnel changes, but I wonder if it's not him holding that record. Not the same of course since he's a solo artist now.

So this was my last rendez-vous with the “No More Mister Nice Guy” show. The new show is under way. Alice mentioned several times that he'll be re-introducing the famous “magic screen” of “Welcome To My Nightmare” fame. That thing made me dream so much when I was younger. I had even set up a whole plan to use one with puppets in a very technical puppet show. But that never happened. So I am extremely curious to see what the “Welcome 2 My Nightmare” screen will be like, I hope it works out. This is one reason I already have tickets to four UK shows, plus hoping for one more show at home.
Labels: Alice Cooper