I finally made a big dream come true which was to follow Alice Cooper on tour at least in part. I just saw the first four shows of the UK tour.


The first stop in this mini tour was Cardiff. I flew the day before the show so I could settle a bit in the mood and meet up with friends. What a fun evening that was.

I know the venue (CIA) as I've been there twice before. So I remembered that the sound is always great in this hall and also that security is really a bitch, there is no other term, sorry.
Some of you may recall a certain Tom Jones concert and how security kept people from dancing and enjoying themselves. This time we weren't even allowed to touch the barrier. What's the point of having one if you can't use it? And how is the audience supposed to show their support? Because that's what these show are about.

Not long ago Alice was at DragonCon in the US. One person asked him what he thought about cosplay. His answer was that it was great if it fueled people creativity, to make a costume and play a character. And that he expected his audience to do this too.

If you know me you’ll know that I‘ve always had a Steampunk “nature”, long before I even learned about the term at the Utopiales in 2003. I’ve always been attracted to the period, more to Edwardian times than Victorian, I always wanted to wear that sort of clothes even as a child. So I was really thrilled when I first saw Alice perform in 1997 and he was in full Victorian garb.

So instead of a costume I was very happy to go all the way and dress up in full Steampunk garb for these shows.

If the fictional character that is my "Alice Cooper concert persona" was given the word here she'd only have a long list of profanities to say about the above troubles. What ever happened to "Freedom to Rock?" The thing you see, is that "Dirty Diamonds" is back in the setlist and it's a personal favourite of mine because the game is on full then.

I never even noticed the guy who apparently warned me he'd throw me out of the venue because I was having too much fun. Someone pulled me back and told me. To see the sad people kill the joy in the egg so to speak was a huge let down.

This was the first show of the UK tour and only the second time the new show was played. The fantastic part about this is that they are still working on things and we had little changes each night. I love it when that happens.

I was overjoyed to see one of my favourite songs back in the show. “Devil's Food” is such a great song, the lyrics are amazing. One day I will be able to put it in painting, it's one of these things that need to be done before I die. So when a few days later Dali the snake made his appearance during this song, I was over the moon, what a marvellous animal he is, and so lucky... I find the snake "works" even better with this song than with “Is It My Body”
EDIT: oops, I assumed Dali was a she, my apologies to him! Hard to say with snakes sometimes.

Three songs from the latest album made their way into this set list although “Caffeine” wasn't in initially, too bad “Brutal Planet” had to go to make way for it. “Welcome to the Congregation”  is really fantastic as a live song and like “I'll Bite Your Face Off” is very danceable.

In mid show there is a section that really innovates from the usual shows and it didn't go down very well with some diehard fans. Alice gets out of persona for a bit, not completely but kind of. While I agree that I love nothing more than to see him “in persona”, I find this a great idea, like time travelling, to my favourite period. “Time Lord” indeed. It was rather moving too. Plus it's the music of my youth. Some complain that there are never any changes to the show, and then others complain when they do change it. I like change, and I enjoy whatever is offered, it will always fuel my imagination. 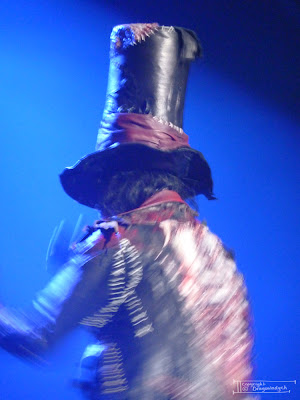 In short, Alice tells the audience about the drinking club he was in with John Lennon, Jimi Hendrix, Jim Morrison and Keith Moon (the Hollwood Vampires) and how he’s the only survivor of the group. He then sings one song from each artist. I love the idea and it’s always been a dream of mine to watch Alice perform a full song by the Doors. On some occasions he’s been known to almost channel Jim Morrison.

I also love that Ryan Roxie gets to play a song by John Lennon as he’s a big fan. 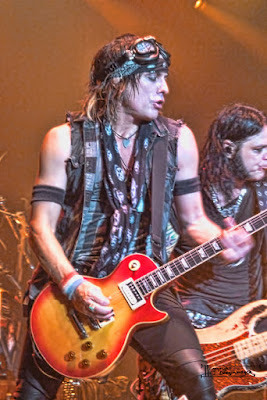 Many find this a bit anti climatic and too long, I didn’t find so but I understand the feeling. The idea was to split the show in three sections and completely separate the tribute from the rest. Maybe it would be better to actually weave the songs in the fabric of the show. And have one iconic Cooper song after each? Something like:

Hello Hooray (explain the Holywood Vampires)
House of Fire
No More Mr. Nice Guy
Break on Through (To the Other Side) (The Doors cover)
I'll Bite Your Face Off
Be My Lover
Caffeine
Billion Dollar Babies
Revolution (The Beatles cover)
Hey Stoopid
The Congregation
Dirty Diamonds
Welcome to My Nightmare
Ballad of Dwight Fry
Go to Hell
Foxy Lady (The Jimi Hendrix Experience cover)
He's Back (The Man Behind the Mask)
Devil's Food
Brutal Planet
Feed My Frankenstein
My Generation (The Who cover)
Under My Wheels
I'm Eighteen
Poison
Encore:
School's Out

Maybe that would go down better?

One thing that struck me as odd is that the band never got introduced it's usually the case.

For many reasons I prefer standing venues and Wolverhampton was absolutely perfect. A lot like Swiss audiences, extremely enthusiastic but never rowdy, at least not where I was, people kept a bit of distance and everyone sang along and danced. 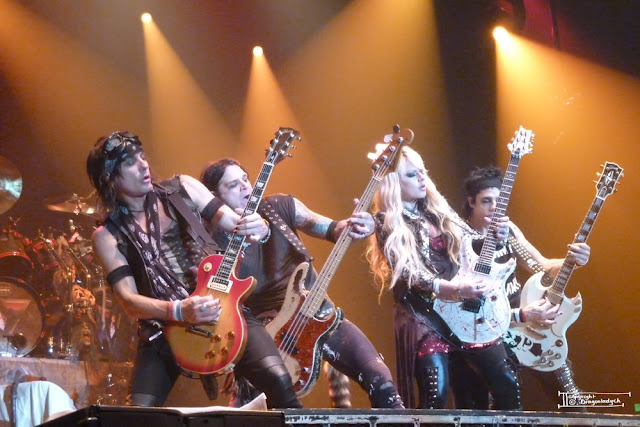 Some technical glitches, really minor ones and I bet the audience in the back never noticed. Like for instance the strap on the Frankenstein device that didn't want to stay fastened for the first two shows.
For me it was the best of all four shows. Everything fell into place perfectly, show was great fun. Plus I got a little gift: 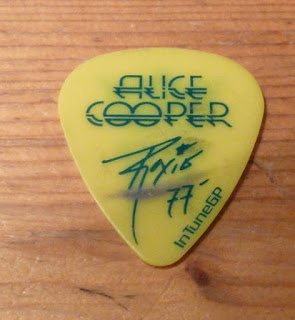 The pick went flying past and as usual I didn’t catch it and couldn’t see it so I gave up. A minute later the guy behind me taps on my shoulder and hands it to me as he had seen Ryan meant it for me. Now that is pretty exceptional and very much appreciated, I made sure to hand him some dollar notes later on, in exchange.
It was the same in Cardiff, people saw how frustrated I was by the whole “Dirty Diamonds” fiasco (when I nearly got evicted) and gave me one of the necklaces. I love that kind of thing.

After a day of sightseeing and driving through the Cotswolds, having a drink in a pub with friends that evening we were off to Bournemouth for another seated venue. Kind of handy to alternate between seated shows and standing ones. But despite the stress and long hours of queuing, I'll always prefer standing venues. Bournemouth was a great show in all aspects, setlist was starting to make more sense, and the musicians were even better too. But myself I wasn't into it at all. I almost regretted that I had lent my camera to Rob who was on the balcony, because I could have tried to get some good shots.  Then again, Rob got some really unusual angles and interesting shots: 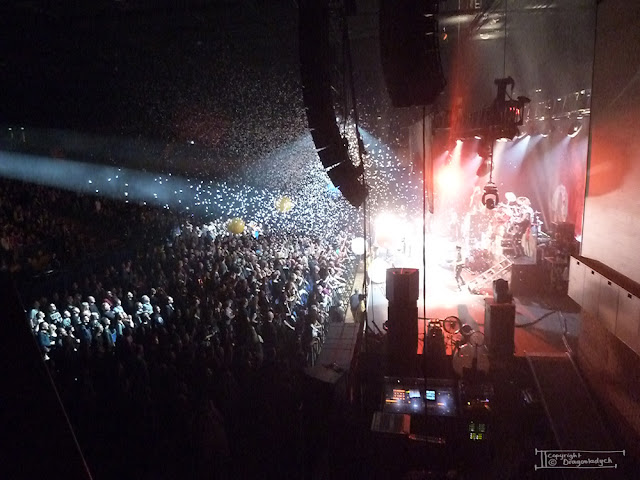 I felt like attending a regular concert which is cool in such but not what I expect from a Coop show, I want to completely forget the whole world around me for the duration of the show. Can't always win I suppose.
At least this time I had plenty space to take out my mask and hide behind it during “He’s Back (The Man Behind The Mask)” apparently no one noticed though. And I had these on as well: 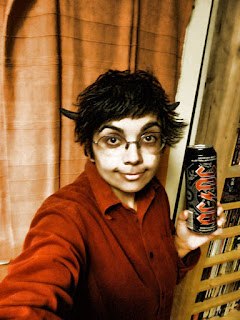 Bournemouth is a pretty town, and our hotel was really fun. Vintage 40’s-50’s complete with scary elevator: 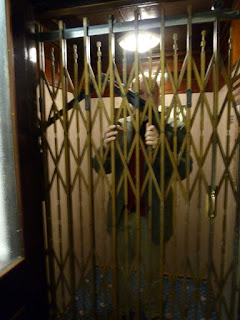 The view from the room was excellent too: 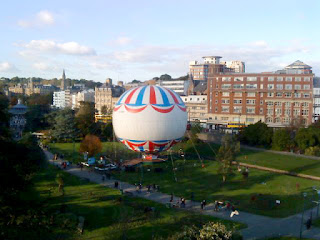 Then it was time to head to Wembley, the last time I was there was in 1998 to see Page and Plant and even if I had remembered what the place looked like there would have been no way to recognize it, the new stadium now stand right next to the Arena, and hotels have grown out of the ground like mushrooms.

Sure enough the Wembley show was fantastic. I was bracing myself for the worst as London crowds can be really violent, but nothing at all. Everyone was well behaved, security was fabulous, and after a horrible moment when some idiot sent us to the wrong end of the hall, which made us lose all the advantage of having being queuing since 2pm, and after having a mini nervous breakdown, everything fell into place.

It’s a little sad that the last show for this year will also be seated, but it will be a "home show" that's always extra special. Too bad I lost my SickThings t-shirt in Wembley but I have new shirt that I can wear on Sunday. Stay tuned.