This was peculiar in more than one way. I am used to have months of expectation before seeing Alice again, this is all part of the fun, the whole expectation thing. This time there was barely a three weeks’ notice as Alice and his crew jumped in at the last moment to replace the Kills who had to cancel their show.

It so happened this was the day of my friend Floriane’s birthday and I’ve been trying to take her to a Coop show for years now. So this year’s gift was easy to find, luckily we both could have time off work at such short notice. I’m so glad I finally could take her along to see Alice, the look on her face during the concert was priceless, pure joy!


This must have been such a nightmare for the whole crew – band and techs - organising everything and flying over just for this one show. In the middle of what is usually a break before the US tour. I’m sure there were tons of problems but it never showed for us in the public. Everything seemed flawless.

It was really cool to hear “Under My Wheels” so soon after Blue Coupe’s version (see previous post) different versions from different original band members. I like that sort of thing.

I got to “play” a little too, mostly in my own little world of course. When Alice does the “drinks” routine “…well maybe three, four, five…” and counts on his fingers, he was looking my way, so I tried to count too but got it all wrong, partly on purpose, partly because it’s hard to think straight when those eyes are looking at you. Best stress relief I know about.

Another song that gets through variations is “The Ballad Of Dwight Fry”, it sounds less sombre, but almost more emotional. I don’t know how to call it technically but the little riff that Ryan plays is lightening up the mood, but also giving a depth to the song. It just really caught my attention.

During “18” I was a bit worried as Alice was on one of the steps that came down the stage, and his prop crutch was getting very close to the edge of that step. I’m sure it was under control but I couldn’t help going “careful there!”

Once more “Devil’s Food” is a highlight for me, some of my all-time favourite lyrics. And there was a snake! This time lent by our collegues of the Lausanne vivarium. Turns out they are in dire straits and need financial help: http://alicecooper.com/latest/news/thelocalch-shocking-alice-cooper-helps-swiss-reptiles-43993
A slightly cheeky boa, as it was sort of aiming to go back backstage as soon as it was out. But lively and very cute.

It was such a big difference from the last show I saw, where we were so close, nearly sitting on the stage. And this stage, so high and far away. But this time the steps that led the artists to come closer provided one new experience (for me at least) coming from Alice. At one point he stepped down to the floor and walked past all of us! It came as a shock for me, last time I was at least as close but not on the same level. I think I prefer the “distance”, the feeling of “so close and yet so far”. Like I said before, to me seeing Alice is like watching your favourite movie while you’re part of the plot? But as much as it’s true I don’t really want to get through the looking glass, there’s more magic in dreaming about it.

Some photos taken by Floriane: 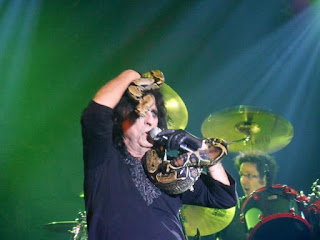 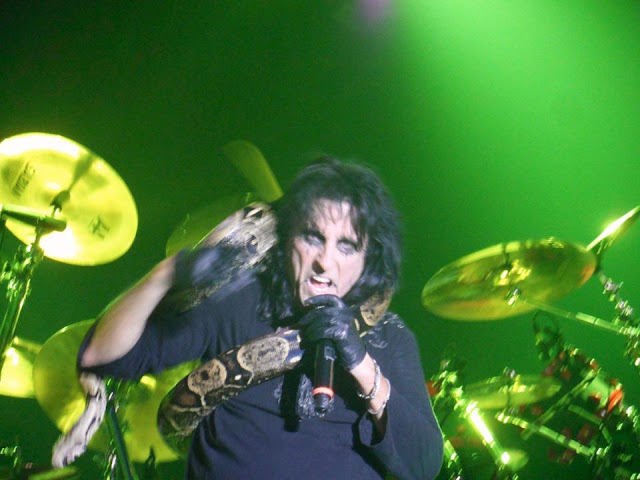 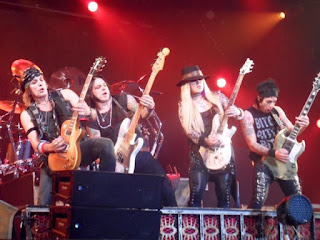 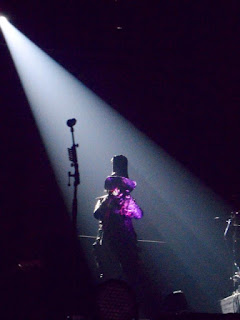