I became an Alice Cooper fan in the early 90's around the time when "Trash" came out.. long story. But even longer was the amount of time I had to wait until I finally saw him live and it was quite the adventure.

As you can see this show was planned to be in Wettingen in a gym hall I had already attended shows at. On that day twenty years ago today I arrived very early as I always do. While I wasn't surprised to see no one waiting I was a bit taken aback by the lack of posters and advertisement, so I asked the employees at the café inside the venue... no one knew about a concert taking place that evening!

After some frantic asking about I finally found one employee who had vaguely heard that the location had been changed and the concert was now in Zurich at the Volkshaus. I still curse the organisers to this day for not putting a single notice up about it, at the original venue.
Bear in mind that not many people had access to the internet and while my parents had it I hadn't heard of this at all!

So on this very tenuous hint I went back to my car and saw a young man who looked just as lost as I, I told him to hop in the car and off we went. I ended up parking at a suburban station because trying to enter Zurich at rush hour is an impossible task. So we hopped in a train and got to the venue just as the doors were opening! Thankfully it was the right place and we got in in time to be in the third row.

I don't recall much about the show after so long, but I of course remember the excitement of seeing my favourite artist on stage for the first time and I recall Ryan Roxie being there too. And I started a tradition of getting a piece of balloon at the end of each show (mind you they don't age well and this one is so brittle now I will have to trash it soon :) ) 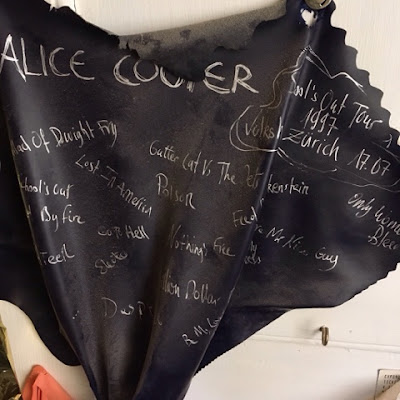 The next day I went to my parents house feeling this familiar nostalgia and this need to share the experience, I searched around a bit and found a yahoo mailing list called SickThings. I had no idea what a mailing list was and how it worked but I joined and posted my experience there

Twenty years later the list has been replaced by another and is not used as much as it used to, having been replaced by social media, but it's still updated. And I made some friends for life there, people I don't see very often but whom I am always happy to see when I can. This is the main reason I travel to the UK to see shows with them, it's the music of course but it's mostly all the friendships.

Thanks a lot guys for being there! Huge thanks to Si and Hunter for keeping this alive all those years too.