So this is the last show for this year, bring on next year!

I’ve explained all about this festival here. And here.
And how you often got to literally lean on the stage. But not always. So I was a bit worried about what would happen.

The whole concert was broadcast live on the web and is still visible but only for France and Germany.
EDIT: seems like it works anywhere, if somewhat intermittently. But if you go to: http://liveweb.arte.tv/ and click the "pop-rock" tab, then select the show, it seems to be working.
But it will be shown on TV at some point for sure. I hope my neighbour will tape it for me when it happens, I don’t even have a TV anymore.

Sure enough we were told not to leave our seats, but were allowed to stand. Then during the break the festival President, as he did the last time, came to us fans and told us we could move closer after the photo people had done their work. I wish I could have told the band about this, the first three songs were a bit pathetic. On my side of the hall I was the only one standing and dancing, in my sheep shirt… the things you have to do as a fan, I tell you! 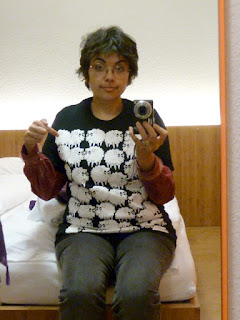 Maybe that's what they mean with "feeling sheepish"

Then as usual everyone moved as one, since I was bracing myself, I aimed for the middle and got the best possible space. I was hugging the small speaker in front of me and the whole sound was reverberating into my chest, what a feeling!
This is quite funny, the person filming caught the moment we all ran towards the stage then forgets to switch off as he (she) walks to the stage too. Whoever that was, was exactly behind me afterwards though.

The set list had been shortened. The whole covers section had been cut, so the show was actually shorter. For once in my life I manage to get so close and the show is amputated! I would imagine it’s to fit the festival format, time wise and also logistically. None of the artists I’ve seen there had their own lightshow and stage, I remember being disappointed when Robert Plant played as he always has amazing lights. So there was no backdrop (probably to show the sponsor’s name all the time) and therefore no banners with the names of the Hollywood Vampires. Alice just used the Lennon sunglasses during Devil’s Food, which was a little sad as I love to watch his eyes during that song [well in fact during all songs, ahem].

There was no snake, what a drag! But the only time there was one here (earlier this year) it was tiny, not really convincing next to the great Dali! Ah well, I visited the vivarium this week end so I got my fill of lovely,  scaly creatures.

When you are that close you need to be a little careful, just like the band themselves. Things tend to fly low and sometimes they’re pointy things. When it’s the riding crop it’s not really a problem, I got hit in mid enthusiasm, that sure makes things feel up close! But with swords you kind of duck a little especially when at the end during School’s Out it gets planted right in front of you! When later on, a balloon hit it, it nearly fell into my hands… not that wouldn't want it but it’s not meant to be a gift!

See when he plants that sword? I was right there! Argh! The Billion Dollars sword was also terribly close, lots of fun

But the best was of course Dirty Diamonds! I got to play my little game once more. He came to me with one necklace again, looked me in the eyes and held one out, I was touching it when he snatched it back and threw it away, so I did my pouting routine… but as he walked away he suddenly threw one right at me! It fell on the floor but I dove so quick that for once I got it!

And this time the band got introduced, what a difference that makes! I love that moment.

At the end I stood there glued to the stage too stunned to move. Knowing it would take hours for me to go to sleep. But when I did I had the most marvellous dreams of course!

And look what the "Coop camp" tweeted today: 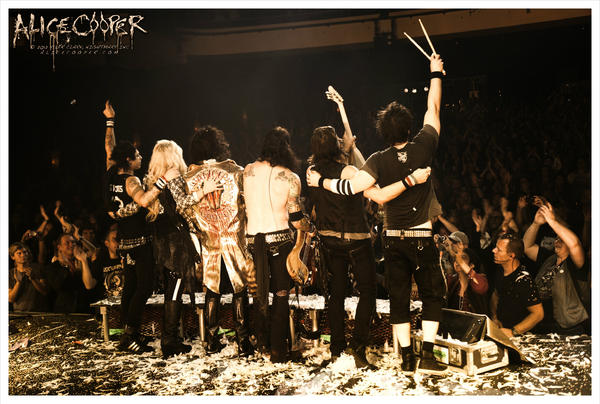 Well my thanks to everyone as well. And I mean everyone, crew, band, fellow fans and of course to Alice, for making these last few weeks an amazing experience!