Yes you read that right, I got myself a big "pre-birthday" gift this year!

I've done it again. After swearing I'd never again go to one of these huge venues to see the Rolling Stones, I caved in. Nearly twenty years after my previous Stones gig. They were my first big show, in 1990, and I saw them again in 1995.

That last time I was at the front, after queuing for many hours in the blazing July sun. That's when I said I wouldn't do this again, in fact I had a ticket to a second night but I gave up. But it was worth it, being so close. Not so this time sadly.

I've rarely seen such bad overall organisation. I never got my tickets and it made for a lot of added stress, thank goodness for email and wifi. But I have to say that the system they have was efficient, there were hundreds of people in my case and they responded within a day and my tickets were waiting at the box office.

There were no signs or information whatsoever anywhere in town or around the park, only when you were almost there did you see some boards indicating the way. Odd really for such a mega-festival.

Then there was the whole fiasco of the layout of the show. It was so bad that some people filed complaints and asked for refunds and downgrades.
In short the best tickets were either the cheapest (GA) or the most expensive (tier 1). But when they went on sale it's not at all what it said. I got tier 2 tickets in the hopes to be relatively close. But even a good place there was about 50m from the stage; needless to say I didn't even make it to that part. All in all it was a rather fair setup. If you paid less you had to run fast to get a go place. Or you could spend a fortune for a shorter run; although the cards were jumbled a bit as there were three gates to pass. And in between, the tickets I had.

I'm glad I didn't get the cheaper tickets, it was a very long run, possibly 500 meters? In blazing hot weather, I couldn't have kept pace with all the young people there. And tier 1 tickets were really out of my means. So I suppose I got the best deal but not what I expected when I bought the ticket. When I got there I had a choice between being maybe third row behind the fence but as I said 50m away from the stage. Or try to stay behind but close to the fence around the central walkway. I went for the second and I think it was a good choice. I barely saw a thing during the show, but at times when someone came down the walkway I was in the first row.

All in all 16 hours of travelling and some eight hours in the sun for a two hour show.

It was great and it was exciting, though the sound could have been a lot better. I'm no expert but I've been to other outdoor gigs, placed as I was I should have heard a much better sound balance.
The worst was whenever there was a solo, the sound was way too loud and drowned the rest, but much worse the drums suddenly came out of the central column at full blast. Many people started to look behind them each time this happened, puzzled or annoyed by this effect.

Like Led Zeppelin did in 2007 the show started with images of the original Hyde Park show. It made for quite a cultural shock. I'm sure things were not really better back then, just different, but one thing that struck me and made me feel nostalgic was the crowd response. It seems to me that people nowadays are generally more jaded and distant. I looked around and saw nearly no one dance. On the video images from 44 years ago everyone seems to be dancing and entranced. Just because there was more weed involved doesn't explain it.
There were also butterflies but digital ones on the screen, not real ones like the last time (don't think this would go down well with RSPCA these days).

I've often talked about how I am in two minds about people taking so many photos nowadays during concerts. I don't really mind, I like to take a few photos myself, but when most people do only that and with phone-cameras to boot, I start to wonder. And when every time something happens people stick their arm in front of you and all you can see is a wall of screens, I think I've had enough.

Then again some people do their own thing and don't bother anyone, like my new friend Tom who sent me these along with some more nice memories: 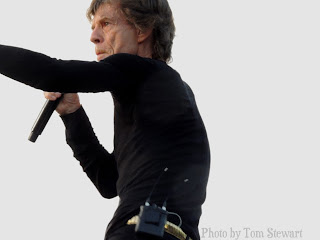 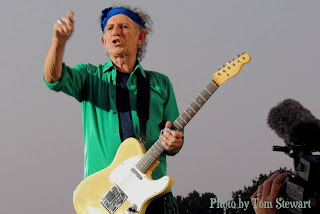 Pretty cool moment was when Mick came out in a white shirt very similar to the one he wore 44 years ago, when he read a poem by Shelley to commemorate Brian Jones' death. I think it was appropriate to hint at this and not make the show into a memorial, but this little nod was enough for real fans and got a big cheer. I wish I knew my poets better, in an interview Mick joked saying he should quote Keats this time, and there was a quote but I am not sure who it was from?

Seeing Keith again was very emotional for me, I tried to catch as many glimpses as I could "in real" and not just on the screens. And of course when he came down the walkway a few times it was brilliant as by then I was at the fence on the side of the walkway. I had a few tears in my eyes when he sang his numbers.
And seeing Mick Taylor with the Stones was the biggest treat for me. Like many other fans I think the period where he played with the band was one of the finest.

There was no big surprise guest, but some of the previous artists came on, like Gary Clark Junior, this made for some really good bluesy moments.
One of the best moments was actually when they played their latest song "Doom and Gloom" to me it felt a lot more energetic and sounded great. And the crowd reaction was excellent.

When you think about it, it's rather strange, the core of five musicians and the "extra" musicians around them, but most of them have been with the Stones for so long that they should be as "big stars" as the others. When Bobby keys starts a solo you'd never expect anyone else in his place. Or Chuck Leavell, and so on.

The backdrop was funny, it reproduced parts of the Park with added fantasy elements (a path going into the distance) and during "Sympathy For The Devil" the whole landscape changed for a hellish version, all aflame and very impressive. Cool idea.

The end reminded me of an Alice Cooper show with lots of red paper flowers being blown in the air and settling around us. I did what I usually do, take a few as a souvenir. 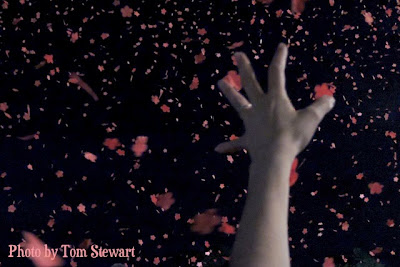 Some "mood" photos
- you can see where the fence was, not exactly close but at least you would have a less crowded view.
- second image should have been take at eye level, the guy in the red cap was really tall he blocked everyone's view, not that it's his fault.
-"my" spot, right where the walkway was turning into a platform.
- last look before walking away 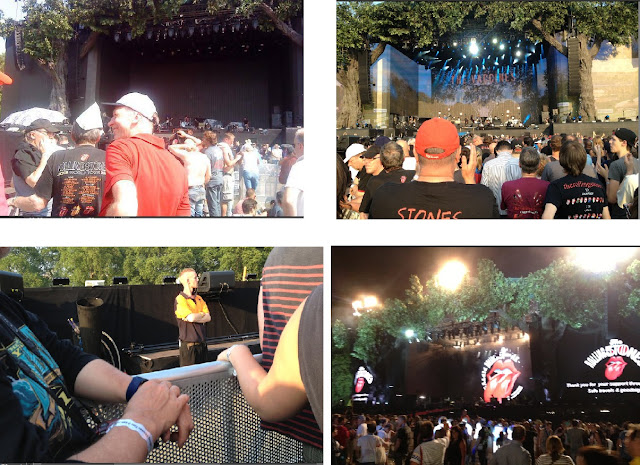