Robert Plant and the Sensational Spaceshifters. Montreux and Zurich, July 2014


It's always best to write reviews soon after the event, but I've been a little busy these past days.

After the nice but a bit miss-happened first experience with SSS In London I was curious to see them again. This time I was on my own, which is different but also fun.

If you read my blog regularly, and also the old blog, you may know that even though I call myself a Led Zeppelin fan, I am not very keen on living in the past and though the re-written numbers sound great, it does get a bit old. Well, I still get a bit nostalgia when I hear "Going To California", but it's never been a favourite of mine, it's a bit like "Poison" with Alice Cooper, not so fond of the song, but rather fond of the memories that go with it. That's a common occurrence, die-hard fans will always say that and other people will need to hear the crowd pleasers, so be it.

The whole set is woven around the threads that are the Zepp songs. Despite what I just said I miss "Gallows' Pole" or "Levee" but my favourite moments are when newer songs are being played. Three of the songs that will be on the new album get played, although in Montreux there were only two. At least I think so, the setlists online are completely wrong so I can't base my review on them.
It's rather brave to play songs that haven't yet been released, but it's nothing new for this artist. I had heard them several times beforehand and really adored them; I can't wait to discover this album.

My personal favourite is still "The Enchanter", what a great song. But the new songs really grabbed me as well, great rhythm and groove. And "Rainbow" has some fine lyrics.
Meanwhile this group of musicians has the "melting pot" down to a fine art and really the experience is worth repeating, never a dull moment, I'd do more if I could. It's music as it should be, soulful and true, I am still as entranced as ever, even after 21 years and 32 shows with Robert Plant, I'll follow him in any of his musical adventures.


A few more general anecdotes and remarks about the festival experience itself and the "stage banter" aka "plantations" feel free to skip this part if you just want a review of the show.

The crowd in Montreux was fantastic, really enthusiastic and happy. As usual there is a very strict policy about photos and security enforcing them often breaks the mood for nothing. Allegedly this is because of artist demand, but I know it wasn't the case that day. More likely it's the festival itself protecting their image. I can understand prohibiting filming, some people bootleg the shows by filming the screens, I sure done condone that (yet this is how I've discovered all of my favourite bands and stay true to them, buying everything the release).

But what's wrong with a couple of photos? It's not for commercial use, it's just a souvenir and a way of giving feedback. In fact it got really silly at the end, one young boy behind me filmed a lot of the show on his phone, but security only intervened at the very end of the encore, completely breaking the mood there. That even annoyed Plant, who took his microphone stand and tried to push the guy away. The man never noticed a thing. A little perspective would be nice.

The last moments were hilarious as Plant was leaving then came back three times in 15 seconds to announce the football results (that disastrous match with Brasil).

So the next day the difference was even starker. Ok the cold rain didn't help the mood; everyone was ensconced in many layers of protection. The festival gives out blue raincoats to all who have a seat away from the sheltering roofs. This got a few acerbic "plantations" about the crowd looking as being wrapped in blue condoms - more like smurfs to me, but hey. The cold made you want to either stay very still or dance, but apparently I was the only one trying to get warm in the first row. Others were stuck on their seats or they would have done so too. I can see how Brits would find it ridiculous to wear raincoats when it's barely raining but it was really cold (about 8°C) and it keeps you warm. Plus I need the big ridiculous hat to keep the rain off my glasses, I really like to actually see things? 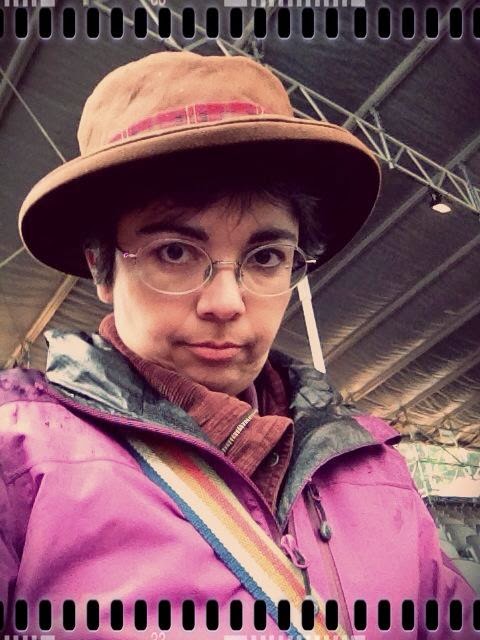 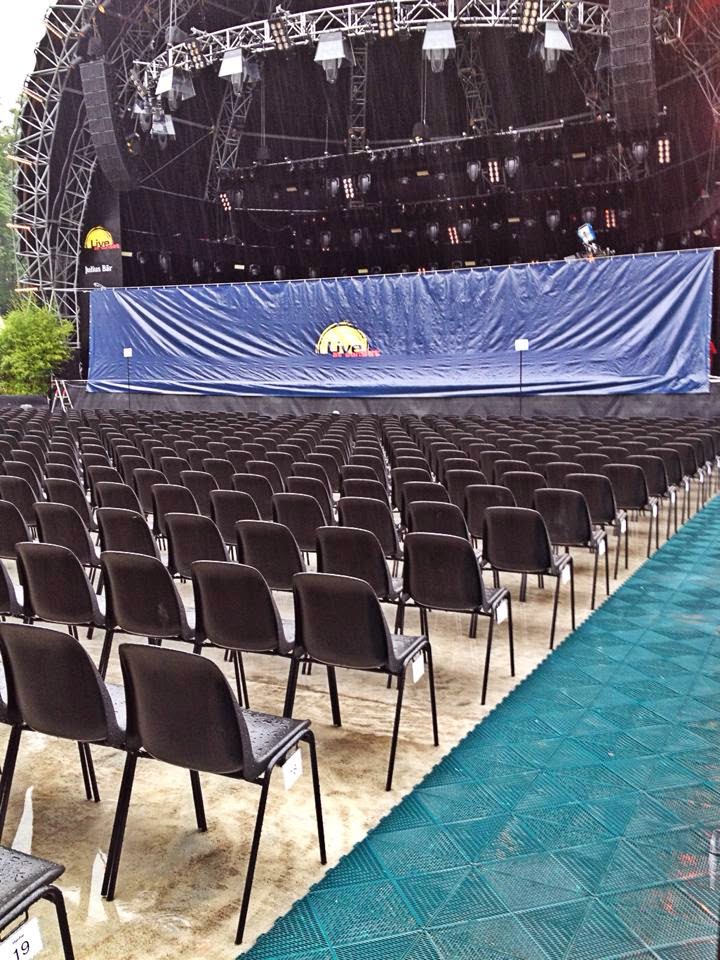 See the first row? Between the festival logo and the little square sign to the right? That was my seat.

And then you have the "walking condoms" those who went off to get more beer or get rid of previously consumed beer. I really wonder why they bother spending so much money just to have a drink and a chat? Some people are simply not there to see this wonderful band at all. There were lots of course but with seats the real fans are diluted through the venue and it loses momentum.

At least for the last song before the encore, people finally got up and stormed the front by the stage, why so late? There was only one security guy he couldn't do much about it, and the rest was a lot more fun. Ah and it's good to see that Plant still carries the "Swiss Ocean" with him after all those years. If you want a demonstration type in "Robert Plant Glastonbury" in youtube and watch around the end of "Whole Lotta Love", watch the whole thing while you're at it, you might go and buy a ticket to a SSS show near you immediately after!
Labels: Robert Plant